I first intended to post about the fact that statistical algorithms can pick out individuals with various mental health diagnoses from the type of language they use on social media last November, but I lost my hyperfocus on the topic almost immediately after I read the original media blurb about a new study. I also forgot to ever read the study itself, which was sad because it should have been right up my alley. (In my defense, I was probably exhausted at the time. I usually am.)

I suppose in hindsight there was nothing stopping me from writing the post after November – when I finally remembered it existed – but I’d have felt like a failure as a blogger. I mean, aren’t bloggers supposed to produce semi-current content for their readers? I’d also hate to disappoint any of my readers who might be statistical outliers, but apparently statistical algorithms can also pick that out.  At least online, I’m not the only one with the attention span of a gnat. Articles over a month old are ancient in the blogosphere. Got to play to my audience and pretend I’m aware of the passing of time.

I truly thought my chance had come and gone. I could have cried with relief when another article came out this month referencing similar research about the language used by individuals with mental health diagnoses on social media. Sometimes I do get a second chance to make a first impression. (I will confess my own self-regulation of my own science ideals vs. science practice hasn’t improved since November. I haven’t read the original research cited in this new article, either.)

I managed to get a timely post up, and I know that – this time- I won’t disappoint my readers. I posted extremely relevant content and I intentionally set myself up to succeed…

…by failing forward. I mean, after all, I did just manage to write the most statistically obnoxious – I mean “optimal” – example ever of a social media post by someone with ADHD above. It should trigger as many automated flags as possible during data mining that I truly have the diagnosis that I know I have. I was, however, only diagnosed in adulthood.

My opening paragraph suggests that I’m a chronic disappointment who means well, but I get distracted by the next shiny object before I follow through on any of my grand plans. Then I end up feeling like a failure when I flake out. On social media, that’s how those of us with ADHD appear. Or, at least that’s how we think we appear. That’s how we talk to ourselves and about ourselves when we’re up late at night giving in to the bullies in our respective brains.

The researchers also found that people with ADHD tended to post messages related to lack of focus, self-regulation, intention and failure, as well as expressions of mental, physical and emotional exhaustion. They often used words like “hate,” “disappointed,” “cry” and “sad” more frequently than the control group and often posted during hours of the day when the majority of people sleep, from midnight to 6 a.m.

Well, that’s depressing. But, noting that it is, in fact, depressing would be a good indicator that I probably have a touch of the depression that is commonly comorbid with ADHD in women.

Language can be separated into two components: content and style. The content relates to what we express – that is, the meaning or subject matter of statements. It will surprise no one to learn that those with symptoms of depression use an excessive amount of words conveying negative emotions, specifically negative adjectives and adverbs – such as “lonely”, “sad” or “miserable.”

I’d say that I can’t win no matter how hard I try, but I’d risk outing myself in the process by admitting that *I* can’t win. It’s a catch-22!

Those with symptoms of depression use significantly more first person singular pronouns – such as “me”, “myself” and “I” – and significantly fewer second and third person pronouns – such as “they”, “them” or “she”. This pattern of pronoun use suggests people with depression are more focused on themselves, and less connected with others. Researchers have reported that pronouns are actually more reliable in identifying depression than negative emotion words.

The style of language relates to how we express ourselves, rather than the content we express. Our lab recently conducted a big data text analysis of 64 different online mental health forums, examining over 6,400 members. “Absolutist words” – which convey absolute magnitudes or probabilities, such as “always”, “nothing” or “completely” – were found to be better markers for mental health forums than either pronouns or negative emotion words.

I won’t even pretend not to recognize the mental health shibboleths sprinkled throughout my posts on this blog. “Something I Failed at Today” is literally a top-level blog category here! If my blog had been around at the time of original research collection for that November article, it would probably have become the prototype for that nascent neural net. I try to write openly about life with ADHD. That means I admit I feel like a failure a lot.

I’m not open about my ADHD in my real life, though, and – for better or worse – I attempt to pass as neurotypical in my career and social life. I don’t feel comfortable opening up to strangers about my mental health diagnoses. I try to pass as neurotypical on my Facebook, which is under my real name. On the one hand, I don’t show weakness easily. It’s hard to think I’d have voluntarily called myself any of the things I call myself in my head online. It’s hard to think I’d have called myself a failure on my Facebook, lest I point out what my brain thinks is obvious to the one person who might have missed it.

On the other hand, I’m not a very active Facebook user. I’ve been known to forget to use it for months at a time and then to make my first post about how I intended to post something sooner, but I’ve been exhausted and/or busy. Oops. That’s not a great sign for my ability to hide my ADHD online. I have also posted a rant or two about Trump winning the election last year before I started defaulting to posting about intending to post. I could maybe be convinced that the number of times I admitted I was disappointed, sad or even crying about the outcome of the 2016 election hinted at my true ADHD nature. I probably have also used the word hate on Facebook simply because I truly do hate the state of the world lately, even if I have never admitted how often I also hate myself!

The Internet is full of mindless excuses to determine if I’ve accidentally outed myself on Facebook, so I submitted my Facebook page to a frequency counter and made a word cloud.  I did the same for my blog – where I am open about my diagnoses – as a positive control. In the one case, I am trying to pass as neurotypical. In the other, I am not. (I did run the blog analysis before I uploaded this post wherein I may have *cough cough* skewed the results just a bit with my first paragraph!) In both instances, I calculated word frequencies for ten randomly selected posts and created word clouds from them on an automatic word cloud generator. Bigger font indicates more frequent usage.

I must admit – I’m a little bemused by the results for this blog. I didn’t use as many ADHD exemplar words in my top fifty most frequent words as I expected. I did use more generic pronouns like “someone” than specific ones like “myself.” ADHD problems with pronoun specificity for the win, there. Thanks to ADHD foibles, I won’t look depressed online?

I am not lonely, since my Partner was my 12th most common word. My partner, though, ranks just after ADHD (#11) in my life. I don’t think that will ever change, since a couple of absolutist terms (never #26 and enough #15) ended up on the list. Dysautonomia has been with me for less time than ADHD, but it’s clearly highly impairing at #14.

I talk about time (#5) a lot like one might expect for ADHD, but I don’t close the loop to say whether I both tried (#33) and whether I then ultimately succeeded or failed. Neither outcome word is in my top 100 words! I am definitely ambitious, though, as I talk frequently about my work (#17). The Rejection Sensitive Dysphoria that comes from implied failure, though, is definitely present (#28) in my blog.

I’m still not quite comfortable talking about trauma (#108) – or maybe, even though I just got back to a formal class this month after an extended break – Improv (#111) really did make that much of an impression on me. Improv as trauma therapy, maybe? I mean, I do like to make (#6) things (#39), after all. PTSD feels like it should be up by ADHD and Dysautonomia, but, apparently, I still feel (#18) some shame (#367) and anxiety (#35) about talking about trauma as openly as my other diagnoses (#104).

The word cloud for Facebook ended up looking horrible after I removed all the proper names. All I do on Facebook is tag others and say hi to them. I then talk about talking to them, as Facebook itself was one of my ten most-used words on Facebook!

The remainder of my top ten were either all annoyingly idealistic sounding – words like happy, volunteer, special, memories, friends – or about very angry topics without ever using angry words. I didn’t use a lot of absolutist words on Facebook, but I talked about some pretty terrible absolutist concepts like Trump, Congress, the news, science denial and the media. I did have trouble remembering to post – just as I suspected – and my most-used word was the non-self-referential “people.”  I can’t decide from that data whether Facebook thinks I have ADHD – or just absolutely knows my political views. 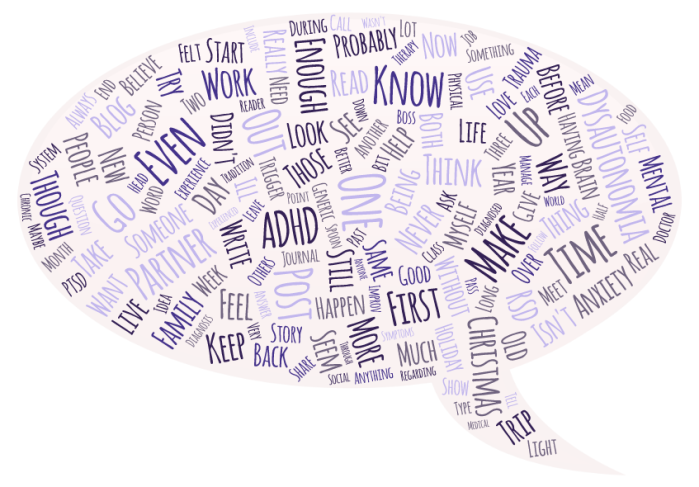