Traveling and being unwilling to bring anything I have actually invested time and effort in with me to Hell means I haven’t posted a Where’s Whoopsie since July! I suppose I could have posted some of my decidedly not-safe-for-work swear word drawings that I relied upon instead of geometric patterns to express my feelings during my time in the 9th Circle of Hell, but even I don’t care to see them, though swearing out loud feels like a great way of reminding myself I’m not in that place anymore. I’m fairly confident some of those swear words leaked into my blog posts anyway over the past few months.

However, I feel like posting something just because I need to mentally distract myself, and typing hurts physically even if it might help mentally. Thus, I’m using the fall back of pretty pictures to make up for a decidedly lackluster pain-fogged blog post. Something appears to be going “around,” and proximity to sick people has resulted in the inevitable acute illness coupled with massive amounts of all-over pain. I would dearly love to understand how bacteria and/or viruses exacerbate joint problems caused by defects in collagen, but they certainly seem to. Acute illness seems to have triggered a truly agonizing all-over EDS joint-pain flare. I’m exhausted but on my second night of painsomnia. The next time someone compares their cold to my chronic illness, I’m going to remind them that we get all the same bugs, then have to deal with another week of our normal symptoms being on overdrive to top it off.

And, oddly enough, that is just the tiniest bit hilarious to me right now. I had a brief preparatory call with my work to plan for my eventual return, and it seems I’ve missed quite a bit of upheaval during my absence. More people leaving, more HR changes, and most definitely more things I don’t yet understand but will probably be thoroughly dismayed with when I complete the additional “welcome back” preliminary call it will take to get me up to speed. Yes, my chaotic workplace has changed so much in my time off that apparently I won’t recognize it upon my return without a hefty dose of prework! (Their words, not mine.) That’s not ominous. Not at all.

One of the things I do know has changed is that the company decided no longer to cover employee insurance at 100%. This means that to maintain the same level of coverage as we’ve had for years, it will now cost most employees $100 more out of pocket. I, however, am sufficiently broken that I actually found the spoonie lining to that otherwise jerky move. Physical therapy coverage under the new provider happens to have a straight copay, no deductible to meet first, and mental health treatments end up about $10 less for me for copay than with my current providers. Since I do weekly physical therapy for EDS and weekly trauma therapy because the 9th Circle of Hell hasn’t conveniently buggered out of existence yet (did I mention one of my swear word coloring books was of UK swear words, by any chance?), I’ll work out to only paying about $15-$20 a month more in the long run. And, in the short run, I can switch to paying a straight copay per session instead of slowly paying off my last $500 that I was putting towards my physical therapy deductible. I think that might even work out to saving a modest amount of money on what I anticipated having to shell out in medical bills this year. When the boss wants to cheap out on paying for health insurance, being a heavy user occasionally ends up offsetting that offload.

Don’t get me wrong, I’d rather pay $100 more per month than deal with my second straight day of pain so intense it hurts to breathe, but since I didn’t get a choice in having chronic illness – and we all know my boss isn’t sympathetic to any chronic physical or mental illness whatsoever – I’ll take the rare bit of irony magnet superpower that turns out in my favor.

I’m not really sure what color pain is, but red seems like a decent representation. And, black and white are the traditional colors for Ehlers-Danlos Syndrome. Have some newsprint (aka black and white and read all over) Where’s Whoopsies! 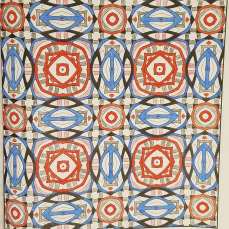